Baked Beet Chips with Sea Salt are not only super easy to make but they are a nutritional anytime snack! They bake up nice and crisp and taste delicious. I had never been a fan of beets. My mother and grandmother often pickle beets, and quite honestly, that was the only way I had ever tried beets. As a child I couldn’t stand the taste, so naturally, into my adulthood, I assumed I would still dislike them. But recently I decided to try a beet salad offered by one of our local restaurants. I was a little leery but the waitress assured me it was really delicious, and she was right. It was so tasty it completely changed my mind on how I view beets, granted they weren’t pickled, and maybe that’s why I enjoyed them. I guess it goes to show that taste buds change and it’s always good to give foods a second chance. Just a little FYI, the natural dye in the beets can turn your urine pink, so don’t be alarmed if that happens!

The next time I went shopping I picked out a few red and golden beets to try my hand at baked beet chips with sea salt. They are such a quick and easy snack to make and don’t seem to last long around my house. I did enjoy the artwork the beets left behind on my parchment paper. I probably should have saved it, maybe I could have become the next Picasso!

It is best to use a Mandolin Slicer if you have one, then you are assured your chips will be sliced the same thickness and cook evenly. I also found that baked beet chips with sea salt cook well if you slightly brush on a little extra virgin olive oil, so the sea salt sticks well through the baking process. If you want to kick it up a notch try added a little dusting of cayenne pepper to your chips. I did prefer the red beet chip over the golden. The red had a slightly sweeter taste. 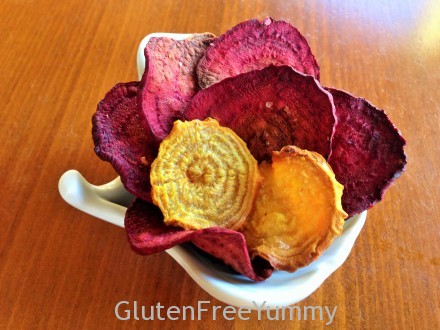