I find it ironic that I am gluten intolerant and am surrounded by wheat fields. This is a picture taken from my deck two days ago. 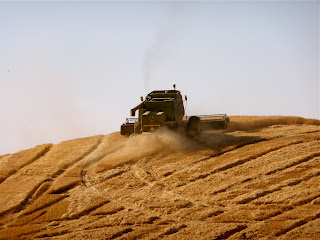 I love watching the combines maneuver the curves of the ripened fields but often wonder if the chaff in the air has any affect on my health. I have lived in the Palouse region for nearly 30 years and try my best to keep my windows closed tight during this season of harvest. My favorite time on the Palouse is shortly after the grain has emerged from the ground. A beautiful blanket of velvet green rolls softly over the hills. The early morning light casts gentle shadows creating an ocean of green rolling waves. 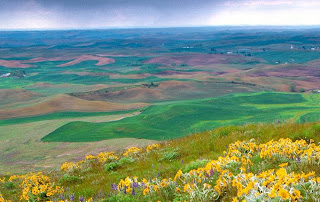 I tried creating a new recipe today using teff flour. It flopped. Not because of the teff,  but simply because my proportions were incorrect.  Baking gluten free is not for the faint hearted. Understanding some recipes will fail, having a sure-fire determination to not give up, and the willingness to venture into uncharted territory will eventually produce a good recipe. I will post a new bread recipe using teff flour, but it won’t be today as I had hoped. Udi’s makes a delicious gluten free bread using teff. I found it in my local co-op. I understand some Safeway stores carry it as well and Amazon carries a few of their products.