My husband and I visited Seattle last month and went to a fabulous restaurant called Tanaka San, by chef, Tom Douglas, where he ordered a savory pancake. I, of course, was unable to taste it because it was thickened with flour, but there were a few nice gluten-free items to choose from. He said the savory pancake was amazingly delicious and that I should try to create something similar for my blog. And so I did. Does it taste the same? No, probably not even close, as I didn’t know what I was comparing it to, but my rendition is tasty and worth cooking up. If you visit Tanaka San you may be interested in taking a seat where we did, on the high stools that over-look the chef’s kitchen; the best seat in the house in my opinion! Of course, if you are out for a romantic dinner then take the table for two (the restaurant is much prettier than the industrial kitchen but I loved watching them cook).

As I watched the chef (not Tom Douglas) but an assistant chef, mix up the batter, he placed two small strips of bacon on the grill before pouring the batter over the top. As the pancake cooked he mixed up a little tangy slaw of some sort. After the pancake was plated he placed it on the top and sprinkled it with sesame seeds.

I believe they made their pancakes strictly from cabbage as their main base but I decided to add a little potato as well.

I also changed it up a bit by adding three sautéed jumbo shrimps on top, not only for the taste but for the presentation. The Asian slaw is a very simple mix of cabbage, rice vinegar and raw honey. Add fresh scallions and sesame seeds on top, along with the shrimp and you have a very lovely presentation. Like I said, I have no idea if this comes anywhere close to Tanaka San’s version, but to this gluten-free cook, it was mighty tasty and good enough for any dinner party!

I like to leave the tails on my shrimp because they look prettier on the plate that way. I know it’s a little messy having to pull them off but I think most guests don’t mind.

A small bite of shrimp, a touch of Asian slaw and the savory potato-cabbage pancake make a very yummy combination. You could even make them bite size with only one shrimp on top for a nice hors d’ oeuvre. 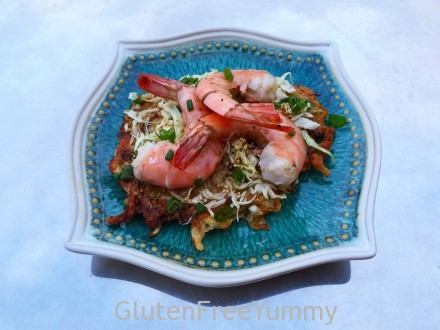 An infusion of flavors burst with the combination of this savory pancake with Asian slaw and shrimp. Cook them large or make small ones for an appetizer.

Make small mini-size pancakes with one shrimp on top and serve as an appetizer.