Spaghetti squash is one of those remarkable vegetables that does something amazing when it’s cooked. It actually produces strands of spaghetti-like fibers that take the place of high-carb noodles. Even if you are not a huge squash fan, you may be surprised at how the spaghetti squash actually has very little flavor, so it’s not like getting a mouthful of squash with some spaghetti sauce on top.

The other bonus is you don’t have that heavy pasta feel sitting on your stomach after the meal. Honestly, I can’t wait to use it in some other recipes. The sauce I created is slow-cooked, rich and deep with flavors of red wine, garlic, and fresh basil; truly the makings of the World’s Best Spaghetti Squash Spaghetti! The Kitchn has a great recipe for Spaghetti Squash Baked Carbonara you might want to try as well.

I mentioned in my last post that my husband and I were heading on a short marriage cruise with Family Life called Love Like You Mean It. We left out of Miami, traveled to Key West, Cozumel, a day at sea, then back to Miami. We saw many seagulls, but were thrilled to get up close and personal with a pelican! A fisherman threw a small fish at the pelican, then it was all over for the posing. Two other pelicans joined in and they fought for the little fish. The fisherman threw another, and then he realized that was not a good idea. The pelicans started chasing him for more! He eventually packed up his pole and left.

We enjoyed our time in Key West, goofing around during the day and a highlight of the trip was renewing our wedding vows out under the stars over the Atlantic Ocean late at night. I wish I had a picture of that, but it’s nice to know after thirty years of marriage, we still really enjoy being a little crazy together.

Most cruise lines have fairly good options for the gluten-free diet. Bread was offered at every meal. Some were a little funky tasting; maybe too much garbanzo bean flour, which has a very strong presence in baked goods. I think the only gluten-free dessert the cruise kitchen knew how to make was gluten-free molten lava cake. Don’t get me wrong, it was very tasty, but having it four nights in a row, I felt like I was living Ground Hog Day over and over again!

After the month of January eating nothing but clean food, no sugar, no processed foods, we are trying to maintain that as much as possible. This recipe is a good eating clean recipe, with baked squash and homemade sauce. Once the squash is fully cooked, take a fork and gently pull the flesh away from the skin, creating spaghetti strands. Pull from all sides, so you end up with a pile of ‘spaghetti’ filling the inside of the squash.

Add the World’s Best Spaghetti Sauce on top, a little Parmesan, and some fresh basil and enjoy a fantastic meal without all the carb guilt! 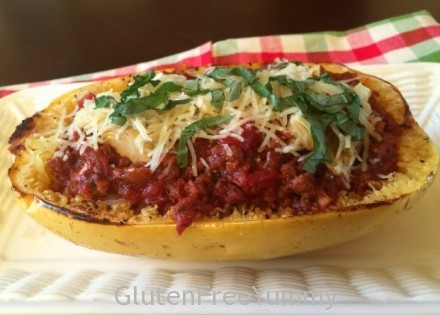 Nothing makes spaghetti better than a deep, rich sauce, unless you put it on top of spaghetti squash! Spaghetti Squash Spaghetti equals no bloated tummy!

This recipe was shared on the following blogs: TheChickenChick