I had the privilege of doing a cooking demonstration at a local oil and vinegar store that is new to our town. I started the menu with these tart and tangy Tahitian Lime Slaw easy gluten-free appetizers. They were a big hit. Not only does the burst of lime and tangerine explode in your mouth but the colorful presentation has a wow factor all in itself.

The two items that make this taste so good are the infused Tahitian Lime Olive Oil and the Tangy Tangerine White Balsamic Vinegar. If you have an oil and vinegar store close by, be sure to stop in for fresh lime infused olive oil and tangerine infused white balsamic vinegar or you may order from the one’s I used, which are out of this world fantastic! If you are looking for other great ideas to whip up some fancy gourmet tasting bites, here are a few links to some top gourmet style gluten-free appetizers in under 15 minutes:

On to a little personal note, my kids and grand-kids are all coming home this weekend! I can say grand-kids because my daughter is now expecting (18 weeks along) our second grandchild and we are beyond thrilled and thankful. After her husband had chemo treatment for Non-Hodgkin Lymphoma, he was tested to see if they could have more children. His cancer doctor told them they most likely would never conceive again. Only five days after people began praying for a miracle, she conceived! So now you can imagine why we are so very thankful. God is so good! 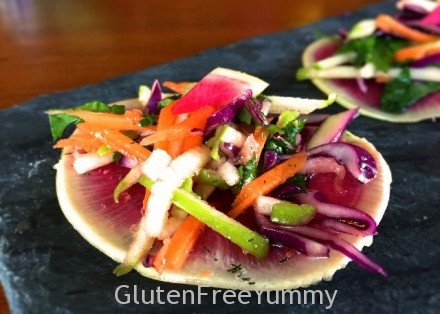 A fresh & colorful Tahitian Lime gluten free appetizer can be made in under 15 minutes. A delicious burst of lime and tangerine in every bite.