My recipe for coconut cashew chicken korma is a dairy-free twist on the traditional chicken korma,  a mildly spicy Indian dish  that calls for buttermilk.  Usually served over rice, I have made it grain-free by serving it over rice-size crumbled cauliflower.  I asked my kids not long ago, what kind of meals they remember me fixing when they were growing up. They said they only remember chicken and rice, that we had chicken and rice every night for dinner!  While that is not true, it is funny that is the only thing they remember.  I’m sure I did serve a lot of chicken and rice, as I was fixing gluten-free meals all my life, and the options for gluten-free were very minimal back then. They often look at my food blog and say, ‘Wow, Mom. why didn’t you cook these recipes when we were going up?’ Well, sometimes when you’re in the throes of raising kids, chicken & rice is all that comes to mind. I’ve often thought as I’ve gotten older that life would slow down but I don’t think it has. Do you feel the same? Some days I think I’m living in warp speed. My daughter turned thirty this past week. Yes, thirty! How did that happen? When my kids were little some days seemed to last forever. Especially the days when I would fold five loads of laundry on the couch only to have the neatly piled stacks thrown to the ground when I stepped out of the room! There were days when I wanted to pull my hair out, like the time my daughter dumped a whole Costco-sized container of cocoa powder on the kitchen floor so she could make snow angels, or the time one of my son’s cut our brand new 2 day old recliner open with a pair of scissors because he wanted to see what made it puffy! Or the time my other son climbed out of his crib, crawled into the closet and covered himself with a blanket. I was certain he had been kidnapped! The whole neighborhood, including the mailman, joined in the search. Those days of parenting were not easy, but I’m sad in many ways that they are but a memory. Yes, it all went so fast.

This coconut cashew chicken korma recipe is not chicken and rice, unless of course, you want to put it over rice instead of cauliflower! If you like the taste of Indian food, you should definitely give this recipe a try. It’s full of delicious spices that will send you straight to India. Rich with cumin, turmeric, cinnamon, and coriander, it’s a flavorful burst in every bite.

Saute onions, garlic, bay leaf, cinnamon and spices for the start of something very yummy. Add chopped chicken to the skillet. Create a thickening sauce with coconut milk, cashews and cilantro. Serve it over ground cauliflower or rice. Not only is this coconut cashew chicken korma very tasty, it also has a lot of anti-inflammatory properties, which help reduce swelling in your joints. So bring a taste of India to your table! 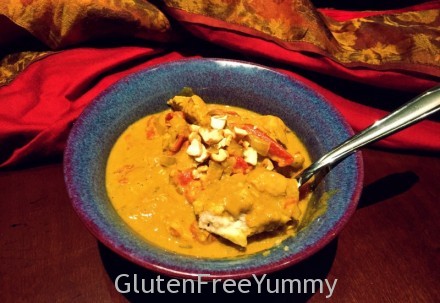 This gluten and dairy-free dish will take you strait to India. Enjoy the spicy creaminess of this delicious Coconut Cashew Korma with Chicken.