It is a bit of an oxymoron to say I have a recipe for Gluten-Free Graham Crackers because graham flour is not gluten-free. It is almost like saying I have a wonderful recipe for gluten-free whole-wheat bread, which I do, and you can check it out here: Gluten-Free Whole Wheat Bread. This last September I attended a bloggers conference in Seattle called IFBC. One evening we were treated to a complete gluten-free meal at the Stumbling Goat Bistro in Seattle. If you ever visit Seattle, be sure to check out this little bistro. It is known as one of Seattle’s best kept secrets. During our meal they served a small gluten-free cracker that was absolutely fantastic! It had a slight resemblance to the taste of a graham cracker, only not as sweet. Of course my wheels started churning about creating a gluten-free graham cracker from whatever their hidden little secret was in this yummy cracker. Someone at our table asked, and sure enough, it was a flour I had never used: Mesquite flour. I did a little research and found out the flour is made from the pods of the mesquite tree, which is native throughout the arid climates of North America and Peru. It contains a rich amount of fiber, protein, and minerals. If you are interested in giving this recipe a try, you can purchase the mesquite flour by clicking on the link below.

The flour is ground very fine, similar to cocoa powder. Mesquite flour ranges from $8-$18 for a one pound bag, which seems expensive, but will last you a long time because it represents about an eighth to a quarter of the mixed flours used in a recipe, mainly due to the fact the mesquite flavor is quite strong.

Blending the flours with butter (or coconut oil if using the dairy-free recipe) helps form a soft ball that is easy to roll. Just be sure to put the ball between two pieces of parchment paper so it doesn’t stick to your rolling-pin. 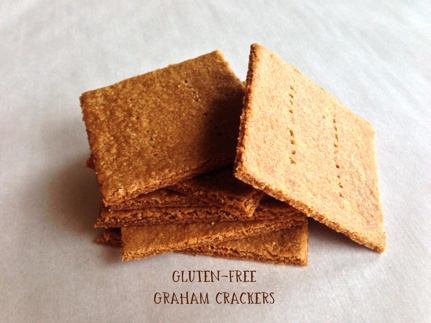 Once you bite into this slightly sweet, crisp and buttery gluten-free graham cracker, you'll long for a homemade s'more. Gluten-free never tasted so good!