Twenty years ago gluten-free cinnamon rolls didn’t exist, at least not at a bakery. As many of you know, I recently attended IFBC (International Food Bloggers Conference) in Seattle. It’s a wonderful conference to meet fellow bloggers, enjoy great food, and sample products from all the vendors. It’s also a great time to sample some of the fabulous food Seattle has to offer, especially if you are gluten-free. I met up with a few gluten-free bloggers and we took a quick break down to a fantastic little bakery near Pike Place Market, where we sampled gluten-free cinnamon rolls, monkey bread, and a caramel apple tart. Tonyia Smith, owner of the bakery and pastry chef extraordinaire, is truly a master of gluten-free baking. The story I heard from a friend was that Tonyia attended culinary school and one of her assignments was to choose a food area she had never worked with and master it. She chose gluten-free baking, and let me tell you, she mastered it! You would be amiss if you visited Seattle and did not stop by the Coffee and Specialty Bakery and give a gluten-free cinnamon roll, croissant, or eclair a taste.

When I got home, gluten-free cinnamon rolls were still on my mind. This recipe is buried way back in my archives but is so good I must post it again. If it has been a while since you have had a delicious, bready, ooey-gooey, pull-apart gluten-free cinnamon roll, and you won’t be visiting Seattle any time soon, then look no further! I know, I know, I know, they’re full of that evil little crystal called sugar, but a once in a blue moon, it’s worth it. I remember several years back, attempting to make gluten-free cinnamon rolls when the only flours used in gluten-free recipes were rice and soy. I can tell you flat-out from experience, it produces a hard little bun that is tough and doesn’t rise. It is such a disappointment when so much time is invested in making them, so that is why I am so excited to share this recipe. Try it, you won’t be disappointed!

The dough will come out slightly sticky. Remember, gluten-free flours react differently than our gluten enemy. Don’t expect to roll this dough like you did when baking with all-purpose flour.

I throw down a little tapioca starch on some plastic wrap, and gently begin flattening the dough with my hands before adding the cinnamon and sugar mixture.

Place these beauties in a warm area to rise (about 30 minutes).

Bake in a 350 degree oven 20-25 minutes or until rolls are a light golden brown.

Remove from oven and allow rolls to rest for 5 minutes before flipping the rolls over onto a large, clean plate,

allowing the gooey sugar to run down inside each roll. These ooey, gooey gluten-free cinnamon rolls are best served hot from the oven,

but they do warm up nicely in a microwave for the following morning. I like to serve them with a fresh platter of fruit. 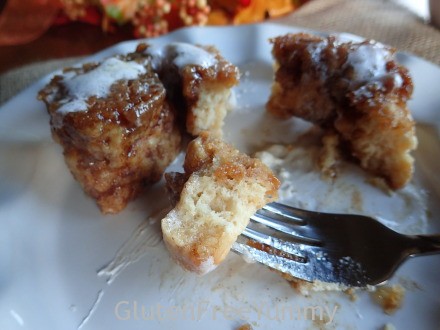 Want to bite into the best gooey gluten-free cinnamon roll with pull apart dough that tastes like the real deal? Try this recipe; you won't be disappointed!

14 comments on “Gluten-free Cinnamon Rolls to Die For!”